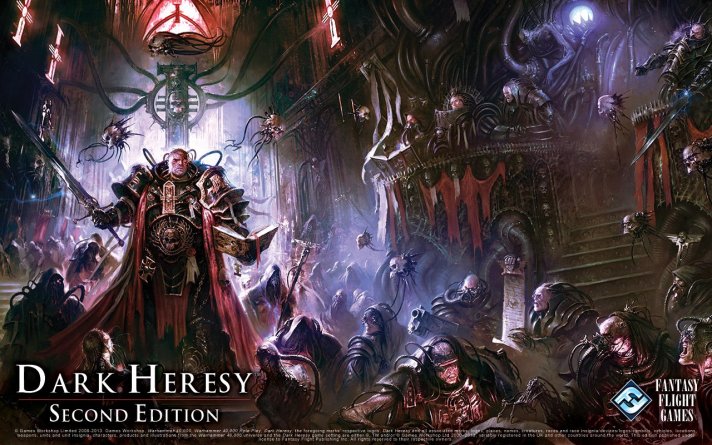 For nearly as long as I have attempted to find random internet factoids surrounding my interest in the Warhammer Universe I have come across unusual levels of depth that remained largely inexplicable to me. They were not pieces of information gleamed from any number of rule books, codex, background books, art books or even the publications of the Black Library or Forge World. Eventually I would discover that much of this well detailed fluff would have originated from the Role Playing world of Fantasy Flight Games, who under license from Games Workshop produce a myriad of products including Dark Heresy, Rogue Trader, Black Crusade and Only War.

I realized that there was a huge swathe of information to be absorbed. The challenge was simple, I knew and even now know very little about paper and pencil RPGs. In fact it is safe to say that I know about as much about that niche as I would expect others to know of mine. As such I did not know where to begin. What to look at or for or through. There were so many volumes, bestiaries, rule books, rule companions, campaigns, adventures and so on that should I decide to invest in anything I certainly could not guarantee making the correct purchase.

After all your humble narrator at A Miniature Odyssey lives in rural Ontario with no brick and mortar retail establishment to reach out too, and certainly not with regards to RPGs.

Quite surreptitiously however, Fantasy Flight Games or FFG as they seem to be know in their niche recently released their Dark Heresy Second Edition. So to sate my curiosity I could invest in four books and have the series in its entirety in lieu of picking and choosing and guessing what to obtain in the far larger alternatives of their other banners.

Thus, I found myself ordering directly from FFG the following titles pertaining to Dark Heresy Second Edition; the Core Rule Book, the Gamemasters Screen, Enemies Within and Forgotten Gods.

I would like to state I have never played a RPG. I do not know anyone who does participate in RPGs. As such my reviews will be limited to the reasons I purchased this series; fluff. By fluff I mean the history, background, ideas and artwork that compose these interesting tomes.

As such, and as my sole disclaimer if you are an avid RPG enthusiast, look away, far away for I do not understand your world and have no intent of insulting it. I review this as a self professed outsider, albeit one now that has developed an interest in how the mechanics might play out (again rural Ontario so the chances are I will never find out) in addition to a new found respect for world I do not fully comprehend.

As for the Core Rulebook the first word that comes to mind are… hefty. I mean 443 pages of full colour hefty. The simply yet recognizable seal of the Inquisition adorns its front cover and within this tome are segments of the culture, history and cartography, organization and who’s who of the Askellon Sector is presented.

This I suggest to be of prime interest to those such as myself looking into this world from the typical Warhammer 40K side of things. Our world is ongoing grim dark death and war with little insight as to how the galaxy actually functions within the Imperial culture and cult. For me it offered a refreshing look at a small piece of the Imperial pie; its government, local variations, organization and hitherto local variants of that also. It was interesting to see the breakdowns and descriptions of whole new planets, systems and cities never before mentioned or alas mentioned ad nausea-um (Cadia, Macragge, Baal and so on).

It was also interesting to read about the technology, gear, equipment, weapons, food, medications and cybernetic devices often seen in the 41st millennium but rarely discussed with any new information in the GW produced works. It was similarly interesting to read in depth about the Inquisition and the variety of persons operating in the Askellon Sector,

As a 40K enthusiast and an outsider it was also interesting to look at and play with the character creation system and see the familiar archetypes from 40K ported over to DH; Imperial Guardsman, Preacher, Techpriest, Arbitrator, Bureaucrat, Assassin and even cutthroat!.

The Artwork is nothing short of phenomenal. As someone inexperienced with FFG’s take of the Warhammer properties I cannot state with assurance that this is either normal or abnormal. With that said the artwork is exactly what I could see myself buying as an art book from the Black Library.

In summation, I do no RP. After reading through this I am certainly willing to try. It could be good fun. A New experience I am not one to decry nor deny. If I was a dedicated RP participant would I have a similar review? I do not know without a frame of reference with which to offer comparison. As a fan of the Warhammer 40K universe who appreciates the fluff, background, ideas, culture, history and depth of the galaxy of 40K, it sated those desires. It was also full of new artwork that represented the gothic-sci-fi imagery, vibes and feelings of the 41st millennium in precisely the way I would have hoped.

Part Two, Three and Four will cover the various expansions released as such. I doubt they will be as long simply because I felt it important to stress time and again that the purpose of my review is not to look at it as a RPer but rather as a 40Ker.